Girls Rule’ as the Summer Coaching Programme continues to prosper

Four weeks into the Summer Coaching Programme of the Northants Basketball Club, attendance remains high. Last week saw the opening of a new coaching centre for under 14 boys at the sports dome at the University of Northampton with the Wednesday evening session being run by David Young a new coach with the club.

One pleasing aspect of the programme so far, has been the number of girls attending sessions. Last week no less than 80 girls practiced with the five age group squads plus another 10 in the “Ballers” Programme. :: Read More ::

Young players are the stars

As the Northants Basketball Club’s Summer Coaching Programme enters its fourth week attendance has remained high and the players have shown an excellent attitude as they work to get back up to speed after the Covid induced lay off.

The second centre for under 14 boys was launched last week at the sports dome at the University of Northampton with David Young taking charge of the coaching. This in itself was very pleasing but possibly even more pleasing has been the turn-out of younger players on Saturday mornings. Almost 70 boys and girls attend the Budding Ballers, Junior Ballers and Under 11 and Under 12 Girls sessions, many of them the siblings of former players.  :: Read More ::

Success of the Club’s Summer Programme  sees another centre open

The overwhelming success of the Northants Basketball Club’s Summer Coaching Programme has resulted in the Club opening another coaching centre. The attendance at all the age group sessions has been good but numbers at the under 14 boys session has been so high that another sessions has been organised. David Young a new coach with the club has secured use of the sports dome at the University of Northampton and he will be in charge of the sessions. :: Read More ::

Last week the Northants Basketball Club launched its Summer Coaching Programme following the easing of Covid restrictions by Basketball England. The programme will run for twelve weeks, it will involve all sections of the Club and unlike the Easter Camps will be held indoors. The first session was held last Monday and the programme continued each evening last week and all day on Saturday :: Read More ::

Following the relaxation of Covid regulations, the Northants Basketball Club has announced an extensive Summer Coaching Programme. The programme which started last Monday will run for twelve weeks and will involve all sections of the Club a total of well over 200 boys and girls.

Unlike the Easter Camps, the Summer Programme will be held indoors and will comply with Basketball England screening and sanitising regulations. The coaching groups will be based on school years and in addition there will be sessions for boys and girls under the age of ten. :: Read More ::

Despite temperatures only just a little above zero the three Community Basketball Camps organised by the Northants Basketball Club in partnership with Basketball Northants went ahead last Tuesday. A total of 80 boys and girls dribbled, passed, and shot through high winds on the three age-based camps on the outdoor courts at Northampton School for Girls.

Twenty-eight boys and girls attended the Primary Schools Camp which was supervised by Karen Goodrich assisted by Tom Greenfield, Benas Maldutis, Athena Thompson and John Collins with several of the young players showing a great deal of talent.
:: Read More :: 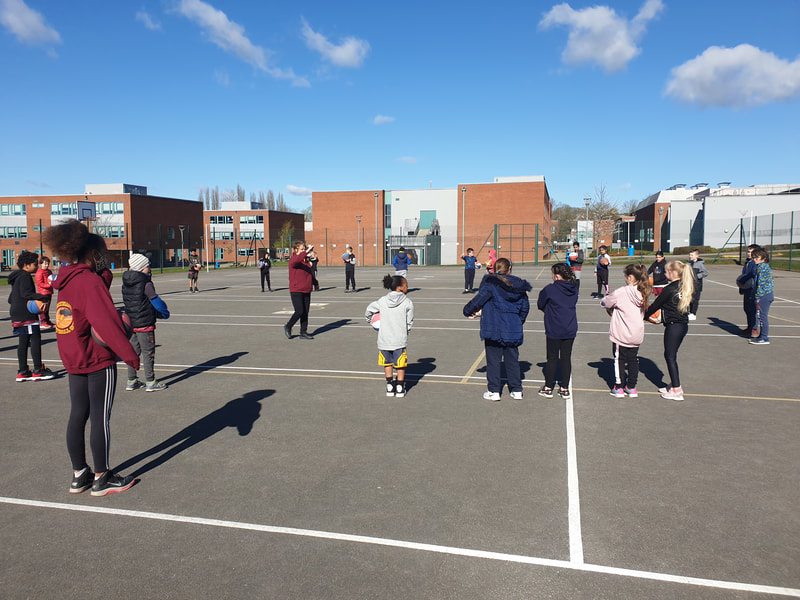 With Covid restrictions lifted on Monday the Northants Basketball Club has celebrated “Return to Play” with a four day camp for their players.  The Camp was run in three sections for boys and girls under the age of 10, boys and girls aged
10 to 13 and the third players aged 13 to 16.

​In all 145 boys and girls attended the three camps with no less than 25 joining the younger group which was supervised by Emma Hardings supported by Young Leaders Poppy Barnett and Nianh Saysell. :: READ MORE ::